How to map Xbox Controller to Keyboard: Basic Tips for Your First Config

If reWASD is the first tool you're using to remap Xbox Controller, you definitely might feel a little bit lost. What should you do first before you start remapping? How to map controller to keyboard to make gameplay easier? We've prepared a short guide for beginners and for remapping old-timers!

Tip 1: Play the game with keyboard and mouse before you map Xbox controller to keyboard

First things first: you need to understand the initial controls and use all of them to estimate the needed quantity of controller buttons you'll need while you map controller to keyboard. Before you remap Xbox controller you also need to understand the interrelation between keyboard and mouse controls, and whether the default controls are comfortable (if they're not — you'll already know what you're going to change).

This is an important part of mapping controller to keyboard: it will be much easier to handle the gameplay if you pick some groups of in-game controls. For example: all the action buttons must not spread all over the Xbox controller, they'd better be among triggers and bumpers. D-pad can perform for weapon change and loot scrolling, and it's better to remap controller sticks to character or camera movement. However, different types of games will have different button grouping. We've prepared some examples to make it clear. 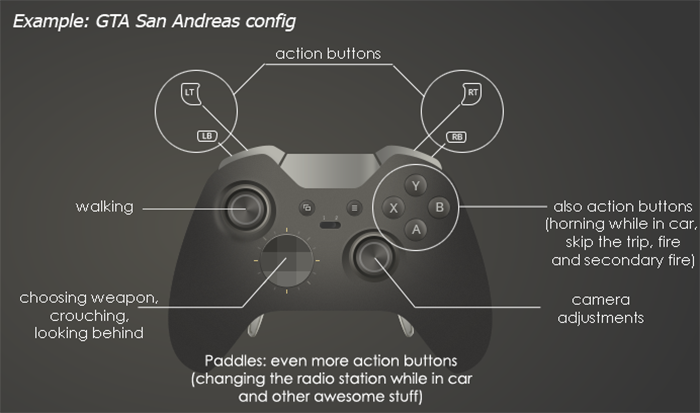 These two types of games have a lot in common while you remap the controller. Sticks will work well as WASD and camera movements. Xbox controller face buttons (XYAB) can serve as menu, character profile, and other managing stuff. D-pad can switch weapons, heal, choose the poison to drink or use any other loot. And finally — triggers and bumpers will serve as action buttons: aiming, shooting / attacking, jumping, etc.

Also, try reWASD not only to remap Xbox controller, but also to adjust stick zones for acting on a hunch: when you lightly press the stick you move slowly, and the harder you push the faster you walk, at the edge point you run as fast as you can. Plus, you can control your character's moves with a single stick, not with a stick and buttons in addition. Learn more about how to remap stick zones while using Xbox controller on PC from our previous post. 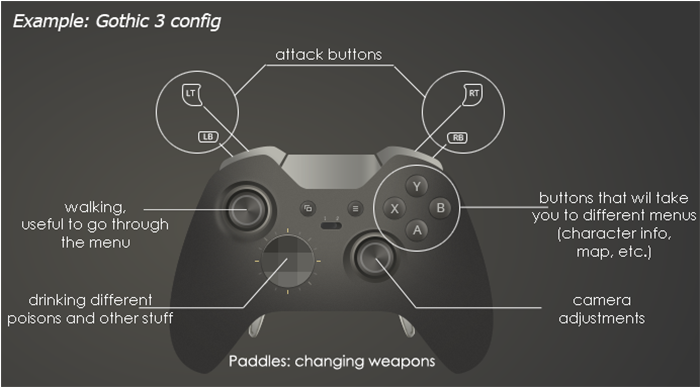 Note that while you remap the controller it will be comfortable if you set the aiming button on the opposite side from shooting, so you could do the aiming-shooting with different hands. If you set both on one side, it will not be comfortable.

Remember, that these types of games usually require instant reaction. That's why if you have Xbox Elite controller don't forget to activate your Xbox paddles and set some important actions to them. This awesome feature is really underestimated, so read more about working with Elite paddles in PC gaming. 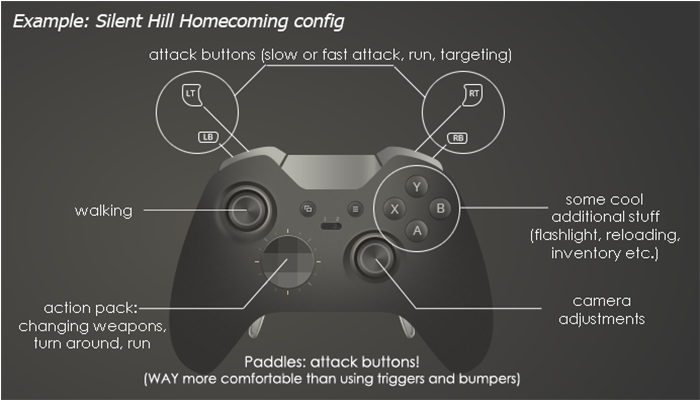 These game genres usually have less action-packed gameplay that FPS, at least there's less controller button pressing. They're focused on the plot and controls are rather simple. So recommendations would be the same as for FPS and RPGs. If you have an Xbox Elite controller, you absolutely need to apply quick weapon change and shooting to Elite paddles.

Use Xbox Elite paddles for platformers 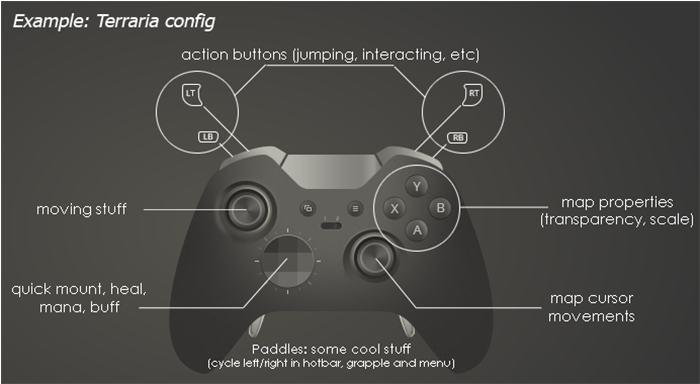 While you play platformers, you're moving in two dimensions, so you need only one Xbox controller stick to move around (you can also set the D-pad for WASD and use it if stick is not comfortable for you). The majority of platformers are adventure games, so you'll need some action buttons (jump, shoot) and buttons to scroll through your backpack. The first ones can be set to triggers and bumpers, and the idle stick can serve as loot scroller, face buttons will be for the menu. If you're a lucky person having an Xbox Elite controller — the best luxury controller on the market — you can apply quick weapon change and shooting to Xbox paddles. Learn more about using Elite paddles on PC in our previous post.

Fighting games usually have a prior for combos when you map xbox controller to keyboard. That's where you have to be super attentive while playing with keyboard and mouse: remember all the buttons to assign controller to keyboard properly. It will be easier if you set parts of combos to face buttons (XYAB) and D-pad, and sticks will act for movement. Triggers and bumpers will also perform as a part of combox. 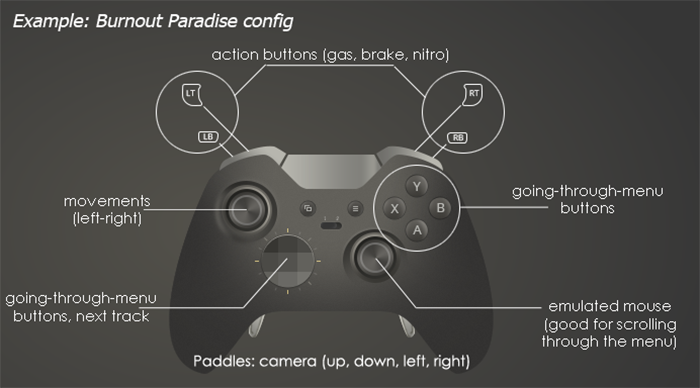 The last game genre we're talking about is racing games. Usually, there is whether standard WASD (arrows) or left-right (A-D) and other buttons for gas and brake. In both cases we'd suggest you to apply A-D (left-right) to the Xbox controller stick, and W-S (gas and brake) to triggers.

Don't set two actions that may perform at the same time on the one side of controller: if your A-D (left-right) stick is on the left, set gas button (that is the most frequently-used) to the right trigger, and nitro to the right bumper. Never set the whole WASD to a single Xbox controller stick, it doesn't work this way in this type of games. Bumpers are good for nitro or shooting (if it's some kind of death arena racing game). Other buttons are optional.

Tip 3: Switch off the controller buttons after you remap controller to keyboard

Even after few reminders on Facebook reWASD page gamers forget about unmaps while mapping controller to keyboard. Check if you've enabled unmaps: if you remap controller with reWASD, you can experience double actions performance. One from the hardware, other — mapped via reWASD. And those actions won't perform simultaneously, one of them will be activated randomly, and that's definitely out of the frying pan into the fire in the PC gaming process. Check the detailed post about how to unmap controller buttons while mapping Xbox Elite controller to keyboard to get to know more.

Every game has particular features, so don't miss the first tip to create a really good profile that will make your gaming better. Just so you know, we post fresh configs in reWASD Community, maybe you'll find the right-from-developers-team config you're looking for. Here are some you may find interesting: Silent Hill: Homecoming, GTA San Andreas and Gothic 3. Follow the updates on our Facebook page or Pinterest board and you won't miss anything.