How to use Steam controller with emulators

Buckle up, a longread incoming! In this blog post, we will review ways to use Steam controller with emulators. We’ve picked some from the most popular ones, and most of them have controls according to what console they’re emulating. What I would suggest first, is to look up how the said controllers look (in case you’re not familiar with them), and refresh your memory about the button layout, because that impacts the way games will react to the remapped Steam controller. And, to get Steam controller ready for emulators, you would definitely need reWASD installed, so that’s where we’re going to start:

Now, jump to the exact emulator you plan to work with, or grab a cup of your preferable beverage to learn more about each of them in order:

How to use Cemu with Steam controller

Cemu is a Wii U video game console emulator, initially released in 2015. According to the description, you can basically launch Wii U games on it, and play them on PC (thank you, Captain Obvious). We have tested this particular emulator with Mario & Sonic at the Sochi 2014 Olympic Winter Games, and used a Cemu Steam controller set-up in reWASD.

After you set up Cemu, the correct path to the Games folder, and all that, make sure to open Options — Input settings. By now, you need to remap Steam controller to Xbox 360 / One or DualShock 4. To speed up the process, we have made the Steam controller Cemu presets, for the case when it’s disguised as Xinput device, and DirectInput device by reWASD. You can download the needed Cemu profile (depending on what Virtual controller type you choose in reWASD), and copy it to \cemu_1.22.10\controllerProfiles folder, so it will appear in the Input settings menu, more specifically — in the Profile drop-down menu directly.

Note, that the controller type in those profiles is Wii U Gamepad.

If you chose Xbox 360 / One and remapped the Steam controller to one of them:

If you chose DualShock 4 and remapped the Steam controller to it:

Pro-tip: as you probably know, Wii controllers have XY and AB buttons swapped. So what I would suggest, before you craft the Cemu Steam controller preset, look up the image of the controller that you chose in Emulate Controller, just to make sure you assign all the keys exactly as you want. The basic options are: Wii U Gamepad; Wii U Pro Controller; Wii U Classic Controller Pro; Wiimote.

What I also noticed is that some games work with certain controllers, so if the emulator doesn’t detect the button presses, make sure to try another controller type in the Emulate Controller menu, in Options — Input settings section. As an example, we have tested the Steam controller in Cemu remapped to Virtual Xbox 360, and ran Mario & Sonic at the Sochi 2014 Olympic Winter Games in Cemu. Only the emulated Wii U Gamepad worked fine.

How to use Steam controller with Dolphin

Dolphin is an emulator for two recent Nintendo video game consoles: the GameCube and the Wii. This emulator can convert different inputs to GameCube and Wii controller inputs, I’ll stick with the GameCube example, also I’ve ran the tests on The Legend of Zelda: Ocarina of Time. Basically, you have 3 options: remap Steam controller to keyboard keys manually (or try our Dolphin Steam controller config); to Xbox One \ 360; or to DualShock 4. Each of these needs some adjustments, so buckle up!

You can create a keyboard config in reWASD that will correspond to the basic binds Dolphin has. The easiest and quickest way, however, would be to grab the Dolphin Steam controller config, Apply it in reWASD, and run the needed game in the emulator. You can customize the given config in reWASD to match your needs, too!

You can grab a Dolphin preset we made for GameCube controllers. Here’s the one for the case if you chose DualShock 4 in reWASD, and another one for Xbox One \ 360. Copy that file to this location: C:\Users\Your User\Documents\Dolphin Emulator\Config\Profiles\GCPad. You’ll be able to use this basic profile a bit later.

Don’t forget to save the profile, so the next time you decide to play, you would have it right there :) Once that is done, Save the changes, and launch the game!

Project64 is a free open-source emulator for the Nintendo 64. As many other emulators, it has several control options, one of them is a basic keyboard layout. You can either create your own config, based on the Project64 layout in Options — Configure Controller Plugin… , or use a Steam controller Project 64 config we have made, that would be the quickest way to do this. Import this config to reWASD, then Apply it to Steam controller, and launch the game in the emulator.

Another way around will take some time: remap your Steam controller to Xbox 360 \ One in reWASD, and then set up the keys in Project64 settings. The emulator recognizes XInput only, so a virtual DualShock 4 is not an option (at least not with the default Controller Plugin, as far as we know). Here are the steps you need to accomplish, allons-y!

Try this Project64 profile I made; then click on Load Profile in Configure Controller Plugin menu to use it.

The game you will play also matters: I’ve tested the mentioned Steam controller Project 64 configs with Resident Evil 2, and it felt like I needed to invert the Y axis for the better controls scheme. If you need to adjust that, you can do this in reWASD too.

How to set up the ePSXe Steam controller config?

ePSXe is a PlayStation video game console emulator for x86-based PC hardware with Microsoft Windows and Linux, as well as devices running Android. We’ll be focusing on the PC part, to see how to use the Steam controller with ePSXe. Since the games you will play on this emulator are all made for PlayStation 1, the layout is quite simple in terms of needed mappings. Here’s what the ‘default’ layout looks like when you open the ePSXe settings: 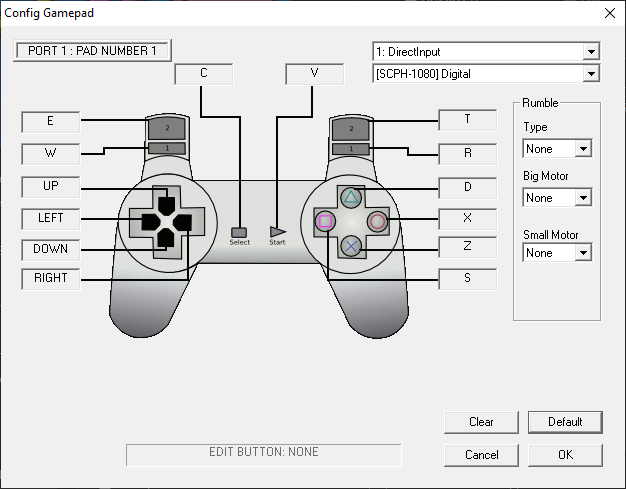 Remapping is inevitable: you need to replicate these controls, come up with your own layout. By the way, we have made a basic ePSXe Steam controller config with keyboard binds, so you can try this one as well. Import this config, Apply it (or Apply the config you have made on your own), then launch the emulator and start the game.

Note, that after you have already started the game, Port 1 menu is greyed out. So you need to relaunch ePSXe to get to it.

This way, your gamepad should be detected right away. Of course, you can try Xbox 360 and DualShock 4 virtual controllers to make an ePSXe Steam controller setup, that would just take more time. There are so many more settings available in this emulator, explore them to find a better way to use Steam controller with ePSXe!

PCSX2 is a free and open-source PlayStation 2 emulator for Windows and other operating systems. This emulator also has a wide range of possible layout arrangements, but we’ll focus on the ones that can help you use a Steam controller on PCSX2. We tested these layouts with God of War 2, and figured out that the quickest way to accomplish that is to remap Steam gamepad to any XInput controller (Xbox One or 360), so that’s what we will talk about first.

If you want to use Steam controller on PCSX2 as a virtual DualShock 4, this is also possible, but will take more time:

You can use a keyboard config on PCSX2, but that’s even more work: you need to create a config in the emulator that will assign PS2 buttons to keyboard and mouse keys, and then make a config in reWASD that will have keyboard binds mapped to Steam controller buttons. That’s surely a way to go, and if you decide to try this, here are a few tips:

Super-duper-ultra-pro tip: just remap Steam controller to Xbox One \ 360 and launch the game on PCSX2

We really hope that this post cleared up the questions you had about using Steam controller with emulators. If not, reach out to us wherever you feel comfortable: Discord text chat, on Facebook, or on reWASD Forum. Make sure to follow us on Pinterest, Reddit, and YouTube to keep your hand on the pulse.