How to set up Flick Stick in reWASD for different games?

I bet everyone who has ever played with a controller thought, “What if the 360-degree stick was actually the character’s horizontal field of view?”. That does sound tempting, and Jibb Smart was the one who went further with this idea. He developed the Flick Stick, and we were curious about how it all started. So let’s talk a little about history before jumping into the technical details:

It was mostly inspired by Splatoon, which required that players do all of their vertical aiming with the gyro. Their "reset camera" button interested me as well — it would quickly turn the camera to face the direction the left stick was pointing. When I tried it myself in Splatoon 2 I found it didn't do everything I wanted it to. I thought it could replace traditional stick aim entirely with some improvements:

Lots of gamers are thankful for this invention, and since its first public appearance in 2019, it has gotten a solid community interested in adapting the existing technology for various games:

I got it working in an early prototype of JoyShockMapper in 2018 and was surprised by how well it worked, and how even with very little practice it could be quite useful. The basic implementation almost hasn't changed at all since that early prototype, and that's how I've been playing shooters ever since.

You can pay a visit to Jibb’s website! Now, let’s get into some technical reWASD-ish stuff :)

Apart from the official help guide that we strongly suggest checking out, let’s get more in-depth with certain games. The first thing we would like you to know is that reWASD’s Flick Stick works with Raw Mouse Input in games: our testing has shown, that even disabling acceleration in Windows settings still leaves some acceleration in games unless they offer to the Raw Mouse Input within the game settings. You still can use Flick Stick with games that don’t provide Raw Mouse Input, but it can be less precise.

Regarding what you can change in reWASD, the most important setting is X Sensitivity: find the X Sensitivity value that will make a full circle on your physical stick also a full circle for your character's field of view in-game. To know if its value is set up correctly, you need to test it in-game, and here are some tips we can give:


We can suggest several ways to check if your Flick Stick performs a 360° turn, set the X Sensitivity value and Apply the config first, then turn your character someplace you can easily memorize (some geometrical shape would be great orient; a corner of the box; a target, like many training places have; etc.)

I’d suggest maintaining the same speed you turn your stick with: games that keep Mouse Acceleration may change the way the mouse behaves depending on the speed you’re turning with.

Here are some finishing touches, after you’ve already figured out the approximate value by following the steps above:

We’ve run some tests with several games and figured out an approximate X Sensitivity value for them. Note, that we have NOT changed any in-game settings before or while testing (mouse sensitivity was in Default), except we have enabled Raw Mouse Input \ disabled Mouse Acceleration if this was possible. Fingers crossed so this information helps you find the value for your liking :) And since some of the games have their own quirks, I will describe them below: click on the name of the game to proceed to them.

We have picked some values for when you’re aiming with different weapons, and here they are:

If you have a certain weapon that you use a lot, you can use Shift mode to create another layer of mappings, that will include Flick Stick for that weapon in particular.

Aiming will require another X Sensitivity value, depending on that weapon you want to use. Alternatively, you can use Flick Stick to look around, and when aiming — use the stick as a regular mouse. You can do this with a little help of Shift mode: set your aiming key as a Shift modifier, then set mouse mappings to the stick.


Let’s not forget about other settings that Flick Stick has: 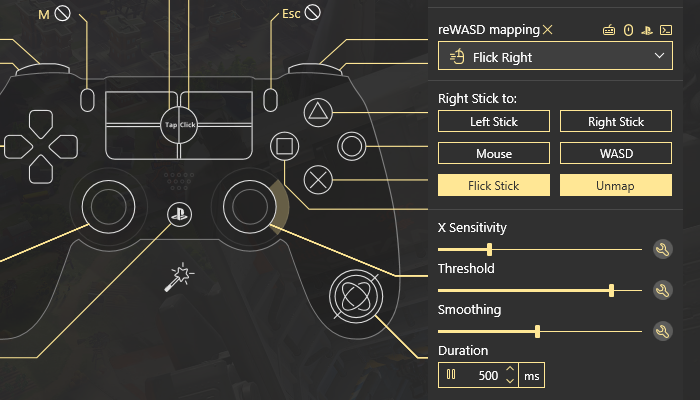 Another important thing worth mentioning is that Flick Stick is better used along with gyroscope aiming. Since Flick Stick covers the horizontal axis, the gyroscope will work with the vertical axis. We have some guides about remapping gyro: a fancy and serious manual, a less serious blog post, and a video with in-game examples. Choose your fighter ;)

We hope this post helps you figure out the perfect settings for Flick Stick in reWASD, and remember, you can always ask us any questions you have! Reach out to us wherever you feel comfortable: Discord text chat, on Facebook, or on reWASD Forum. Make sure to follow us on Pinterest, Reddit, and YouTube to keep your hand on the pulse.